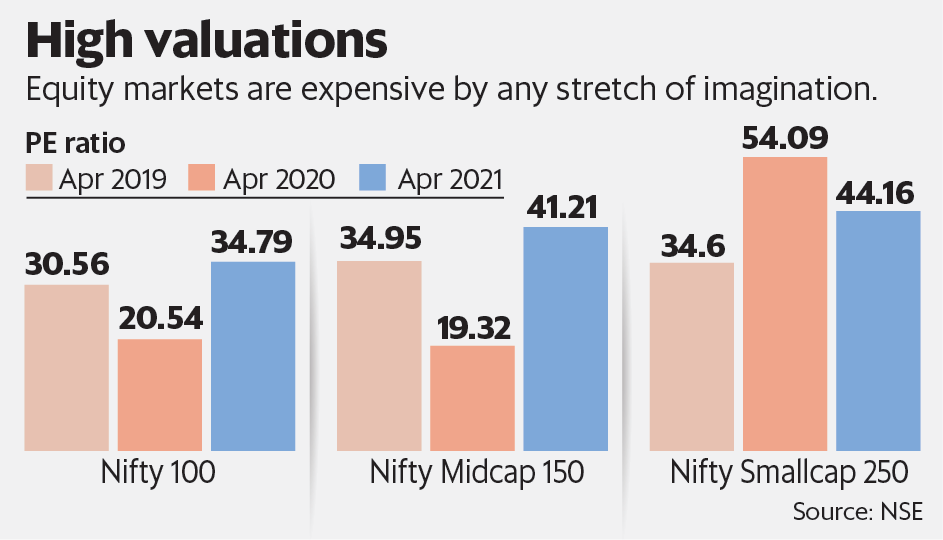 Is this a turning point in the stock market? Over the past year, to the surprise of many, the pandemic led to a boom in the markets with people pouring in money to invest in financial assets. There has been a rush to take advantage of this bull run with many more companies going public in the first three months of 2021 than all of 2020 combined.

But this trend has started to reverse recently, with the correction in equities on 12 April being extremely sharp. The Sensex and Nifty both fell by approximately 3.5%, the BSE mid-cap and small-cap indices also fell 4-5% and all sectoral indices ended in the red.

The correction appears to be due to local factors because other Asian equity markets like the Hang Seng and the Nikkei fell, but by a smaller amount of around 1%. The fear of renewed restrictions and lockdowns amid a rising number of covid cases appears to be top of the mind for many market participants.

Indian equity markets are now expensive by any stretch of the imagination. At the beginning of April, the Nifty 50 trailing PE ratio was roughly at 34 times, while the Nifty Next 50 had a trailing PE ratio of around 43. A few years ago, many people in the industry talked about the Nifty being in an average range of 18-22 and there were even charts from fund companies with red and green bands that said that if the Nifty goes out of the range, you should reduce your allocations or even exit the market.

Today, with valuations well outside these ranges, you do not hear much from the industry about those same charts—but such is the nature and incentives of the mutual fund industry.

Valuations in the broader market are also similarly well outside typical ranges with the Nifty Midcap 150 having a PE ratio of around 41 at the beginning of April. When you couple this with the returns that the indices have given over the past year, that gives cause for concern. At the beginning of April, the one-year return for the Sensex and Nifty were roughly 80%! Mid-caps and small-caps were even higher with the Nifty Midcap 150 giving returns of over 100% and the Nifty Smallcap 250 giving returns of around 120%.

One cannot predict the future, but these kinds of returns are not sustainable over the long run and so it is not surprising that we have started seeing some correction and reversion back to the mean. So, what is an investor to do?

The first thing an investor should do is review his/her asset allocation. If equities have rallied sharply over the past year, then it is likely that the percentage allocation to equities in the overall pie has also gone up. Reviewing this mix regularly and rebalancing it back to the target is a prudent and healthy way of keeping the portfolio in shape over time.

Second, we hear a lot about not trying to time the market and staying invested for the long term. However, the ‘long term’ is different for each person. When keeping a specific financial goal in mind, it is important to have an idea of both the money value and the time horizon of the goal. If an investor has a financial goal that is due in the next few years, then it would be important to look at how much closer the high returns of the past year have brought them to his/her targeted corpus.